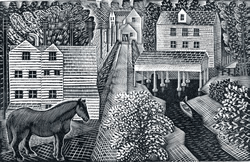 Published jointly by Merivale Editions and Jennings Fine Art, Hull’s Mill is an engraving on boxwood hand printed by Ian Mortimer from the re-discovered original block. The edition is limited to 150 numbered copies for sale on 160gsm vélin d’Arches paper. The paper size is 296 x 209mm; image size 195 x 125mm. The print is presented in a paper portfolio with an historical note by Alan Powers.

The History (by Alan Powers)

Eric Ravilious’s large wood engraving of Hull’s Mill is not completely unknown, but only a few prints of it have ever been made. We know the moment when Ravilious discovered the subject, for he wrote to his close friend Helen Binyon on 3rd June, 1935, ‘I want to go out again this evening to a Hovis Mill – rather like one at Barcombe and pretty as possible, white and almost new looking.’ This was Hull’s Mill on the River Colne, where it flows downstream from Ravilious’s new home town of Castle Hedingham towards Colchester. He took special delight in the shallow stream that still crosses the road as one approaches the mill – ‘a pleasure to cycle through and it makes such a pleasant gurgling noise.’ In another letter he wrote, ‘It is an extraordinarily attractive place’, and so it remains today.

Helen Binyon’s letter has a rough drawing of the upstream view of the mill, very much as it appears on the right hand side of the print, and in another engraving on the cover of Country Walks No.2, produced for London Transport in 1936. The central image of the engraving shows the mill from its end-on, downstream aspect, with the single storey addition housing sacks of flour, waiting to be collected from their raised loading platform, as painted by Ravilious in the watercolour Hull’s Mill (exhibited at the Zwemmer Gallery in 1936), recently acquired by the Fry Art Gallery at Saffron Walden. The watercolour includes the shallow water splash ford, which the engraving omits. In the engraving, the mill on the left may be a different building entirely, and the reason for including three mills in one picture is not clear. The handsome black horse appears in the letter and in both the engravings, representing, like the mill itself, a benign form of power soon to become obsolete.

Why was this engraving made? No record survives of a commission, although at this stage of his career, Ravilious could no longer spare the time to engrave simply for his own pleasure, as he did when younger. A letter to Helen Binyon in November 1935 mentions ‘preparing a large block’, and this one fits the description. The block itself is under type height, and therefore presumably planed down after being used for one or more other engraving, as sold by T. N. Lawrence and Son (of Bleeding Heart Yard) as a cheap alternative to full height blocks. The cutting technique, especially in the foreground tree, seemingly white with may, is looser than usual, suggesting an urge to experiment. As well as straightening the road, Ravilious has emphasised the line of telegraph poles, showing his fondness for abstract geometric structure, while the little boat on the dark water, absent from the other renderings of this subject, adds a touch of Schubertian wanderlust.

Eric Ravilious was born in London in 1903. He studied and later taught at the Royal College of Art. He is now recognised as a key figure of the great renaissance period of English art and design in the 1920s and 30s. His wood-engravings for the Curwen, Nonesuch and Golden Cockerel Presses and design commissions for Wedgwood represent his best known work. He was also a distinguished painter. He died in 1942 on active service as a war artist.