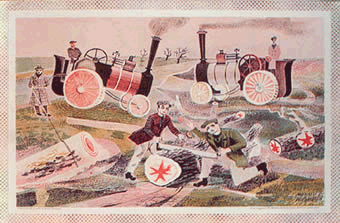 Michael Rothenstein, the son of the celebrated artist Sir William Rothenstein, studied at the Central School of Art from 1924 to 1927. Early in life he suffered a long illness and in 1940 he went to live in Essex where he became influenced by the Neo-Romantic movement which was concerned with evoking emotion in landscape imagery. He moved to Great Bardfield in 1941, staying first at The Place House, where John Aldridge also lived, and then Ethel House close to Edward Bawden's home. He produced images of the Essex landscape through the Recording Britain project. After the war he began print making and in Paris he worked at Atelier 17 with Stanley Hayter.