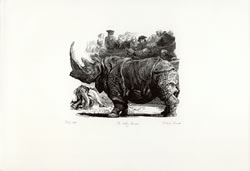 Original wood-engraving on holly printed directly from the block by Jonathan Stephenson at the Rocket Press, Blewbury, Oxfordshire in an edition of 500 numbered and signed copies on 225gsm Zerkall mould-made all rag paper.

Simon Brett was born in Windsor in 1943. He went to St. Martin's School of Art, where he learned wood-engraving from Clifford Webb. He lived in Mexico and Provence for short periods before settling in Wiltshire in 1971. Until 1980 his work as a wood engraver was largely ephemeral - a monograph on his bookplate work was published in 1982 - but since then he has illustrated several books and published many of them under the Paulinus Press imprint. For the first of these, The Animals of Saint Gregory he was given a Francis Williams Illustration Award by the Victoria and Albert Museum.