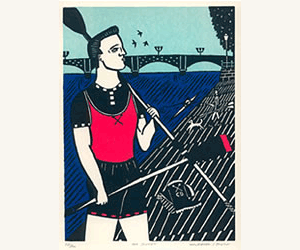 Original linocut printed directly from the lino block by Sebastian Carter at the Rampant Lions Press, Cambridge in an edition of 500 numbered and signed copies on 225gsm mould-made all rag paper at St. Cuthbert’s Mill, Wells, Somerset.

Christopher Brown’s linocut The Sculler has been inspired by everyday scenes on the Putney embankment. Christopher was born in Putney in 1953 and has lived most of his life near the embankment, starting point of the annual Oxford and Cambridge Boat Race.

After studying at Hornsey and the Royal College of Art, Christopher worked with Edward Bawden, who encouraged him to explore lino-cutting. Christopher has exhibited at The Royal Academy and the Victoria and Albert Museum.

He has produced and illustrated several books, including An Amorphic Alphabet and An Alphabet of London.

He lectures at Liverpool School of Art and at Central Saint Martins.