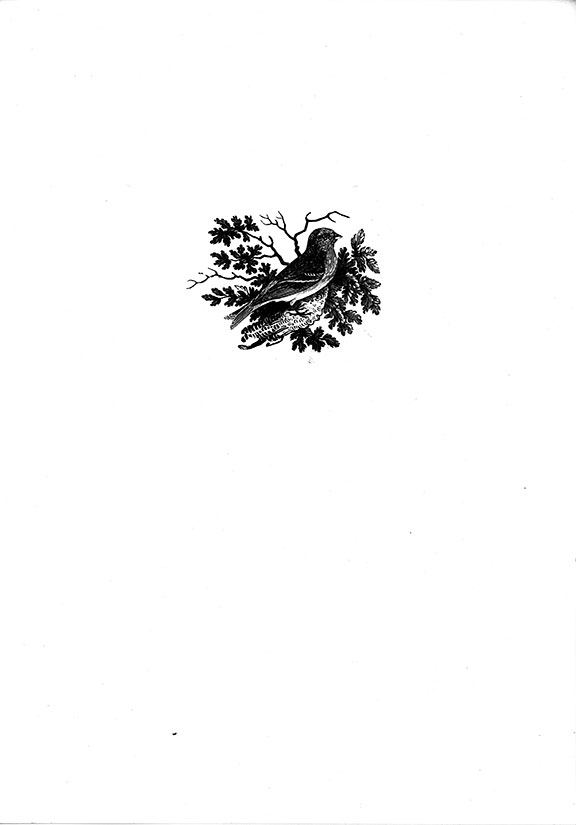 Bewick Engraved this portrait of the Lesser Redpole at some time between 1792 and 1796, for publication in the first volume of his most celebrated work, the History Of British Birds of 1797. The block has retained its original condition to a remarkable degree. It was engraved in days when the wooden press, with its soft but resilient blanket impression on dampened paper, was still in use – and it is with this technique that the present prints have been made. The pressure differentials essential to any engraving that expressed much fineness and graduation of tone were, in the nineteenth century, achieved with elaborate cut-out overlays assembled on the tympan of the press. Bewick built these differentials into the block: before starting to engrave, he lowered what were to be the most delicately toned areas by scraping them down below the main surface – often by as much as a sixteenth of an inch, occasionally more. His preparatory drawings varied in degree of finish, but he transferred no more than an outline to the block – from then on, all was free-hand cutting, in a fashion that has never been surpassed.

The Lesser Redpole has here been printed directly from the boxwood block engraved by Thomas Bewick. The printing has been undertaken by Iain Bain, using an Albion hand press made in 1836. The paper is 145gsm Zerkall mould-made, dampened before printing.

Thomas Bewick was an English engraver and natural history author. Early in his career he took on all kinds of work such as engraving cutlery, making the wood blocks for advertisements, and illustrating children's books. Gradually he turned to illustrating, writing and publishing his own books, gaining an adult audience for the fine illustrations in A History of Quadrupeds.

His career began when he was apprenticed to engraver Ralph Beilby in Newcastle upon Tyne. He became a partner in the business and eventually took it over. Apprentices whom Bewick trained include John Anderson, Luke Clennell, and William Harvey, who in their turn became well known as painters and engravers.

Bewick is best known for his A History of British Birds, which is admired today mainly for its wood engravings, especially the small, sharply observed, and often humorous vignettes known as tail-pieces. He notably illustrated editions of Aesop's Fables throughout his life.

He is credited with popularising a technical innovation in the printing of illustrations using wood. He adopted metal-engraving tools to cut hard boxwood across the grain, producing printing blocks that could be integrated with metal type, but were much more durable than traditional woodcuts. The result was high quality illustration at a low price.