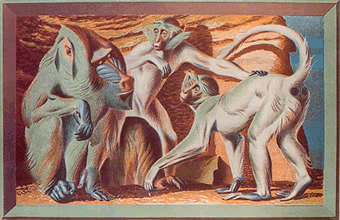 Hans Feibusch, a German Jew whose work was displayed by the Nazis in their 1937 Degenerate Art (Entattete Kunst) exhibition, lived through virtually the entire 20th century. He was born in Frankfurt in 1898. In 1930 he was awarded the German Grand State Prize for Painters by the Prussian Academy of Arts in Berlin, but in 1933 and unable to work in Germany, he fled to Britain where he spent the rest of his life.

Between 1938 and 1974 he painted 40 murals for churches and cathedrals. His masterpiece "The Trinity in Glory" is on the walls of St. Alban the Martyr off High Holborn in London. During those years he converted to Christianity, but in 1992, he renounced his adopted faith and returned to Judaisim. In 1995, for the first time, he dealt directly with the trauma of Nazi Germany, reportedly after seeing Shoa, the film chronicle of the Holocaust.