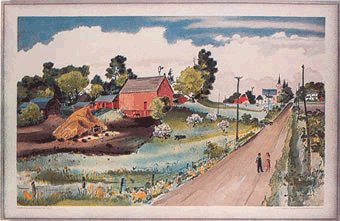 Adolf Dehn was born in 1896 in Waterville, Minnesota. He spent three years at the Minneapolis Art School. There he received a scholarship to the Art Students League in New York for one year. When this expired, he moved to Europe, where he lived and worked for eight years. He spent most of this time in Vienna, but traveled widely.

Until 1936, Dehn was known for black and white illustrations and drawings, but become famous in his later years for his activity in watercolors and lithographs. Many of Dehn's peers considered him to be to the greatest lithographer of his time.

Dehn was a member of the prestigious National Academy of Art and Design. His house is now a National Historic Site.