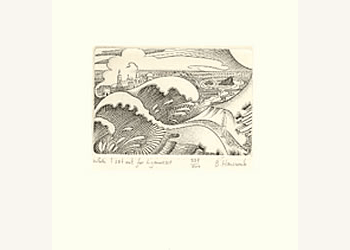 Original engravings on copper illustrating two poems by Thomas Hardy. Printed in an edition of 500 numbered and signed copies on Somerset mould-made paper by Philip Bawden.

Brian Hanscombe was born in Herefordshire in 1944. At the age of 16 he was apprenticed as a letterpress engraver at the Sun Engraving Company in Watford, and at the end of his period of indenture became a journeyman hand engraver. After a further two years he qualified as a gravure engraver. In 1979 he left the printing industry to work as a self employed artist engraver. He now lives in north Cornwall -- Thomas Hardy's Lyonesse.