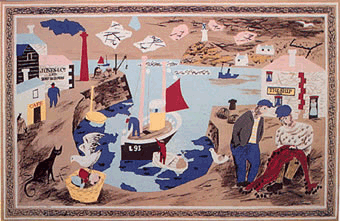 Julian Trevelyan was born in Dorking, Surrey. He was educated at Bedales School and Cambridge University, where he was a member of the Experiments group. For several years in the early 1930s he studied with S W Hayter at Atelier 17 in Paris. His early work was experimental, his paintings incorporating everyday objects. At University he had written that "to dream is to create" and so it was logical that he became one of the English Surrealist Group in 1936. During service as a camouflage officer in the Royal Engineers during World War II he declared his religion to be Surrealism.

He was a tutor at the Chelsea School of Art and engraving tutor at the Royal College of Art. His autobiography Indigo Days was published in 1957.