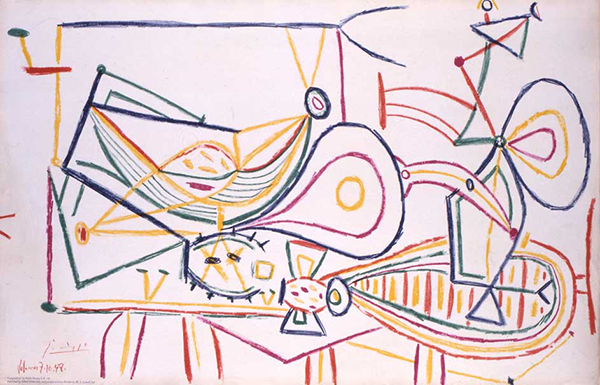 First famous for his pioneering role in Cubism, Pablo Picasso developed his art with a pace and vitality comparable to the accelerated technological and cultural changes of the twentieth century.

At the age of 14, he completed the one-month qualifying examination of the Academy of Fine Arts in Barcelona in one day. From there he went to the Academy of San Fernando in Madrid, returning in 1900 to Barcelona, where he frequented the city's famous cabaret of intellectuals and artists, Els Quatre Gats.

The years of 1901 to 1904, known as the "blue period" were a time of frequent changes of residence between Barcelona and Paris. During this period, he would spend his days in Paris studying the masterworks at the Louvre and his nights enjoying the company of fellow artists at cabarets like the Lapin Agile.

1905 and 1906 marked a radical change in color and mood for Picasso. He became fascinated with the acrobats, clowns and wandering families of the circus world. He started to paint in subtle pinks and grays, often highlighted with brighter tones. This was known as his "rose period."

In 1907, Picasso painted "Les Demoiselles d'Avignon," and met Georges Braque, the other leading figure of the Cubist movement. In 1937, he responded to the saturation bombing of the civilian target of Guernica by the Luftwaffe with his great anti-war painting, "Guernica."

During World War II, Picasso lived in Paris, where he turned his energy to the art of ceramics. From 1947 to 1950, he pursued new methods of lithography.

The l950's saw the beginning of a number of large retrospective exhibits of his works. During this time he began to a paint a series of works conceived as free variations on old master paintings.