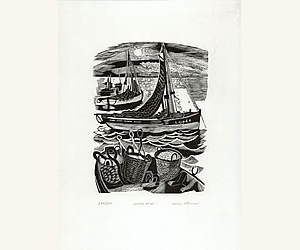 Original engraving on boxwood; printed from the blocks on 225gsm Zerkall mould-made paper in an edition of 500 numbered and signed copies. Printing was by Jonathan Stevenson at the Rocket Press, Blewbury, Oxfordshire.

John O'Connor was born in Leicester in 1913. While a student at the Royal College of Art, his tutors included Eric Ravilious and John Nash. Ravilious was responsible for O'Connor's first commission to illustrate Here's Flowers for the Golden Cockerel Press in 1937. Among the many books illustrated by John O'Connor are Canals, Barges and People (1950) and A Pattern of People (1959), for both of which he also provided the text. From 1948 to 1964 O'Connor was Head of Colchester College of Art. He now lives in the Scottish Borders where he continues to engrave and paint.