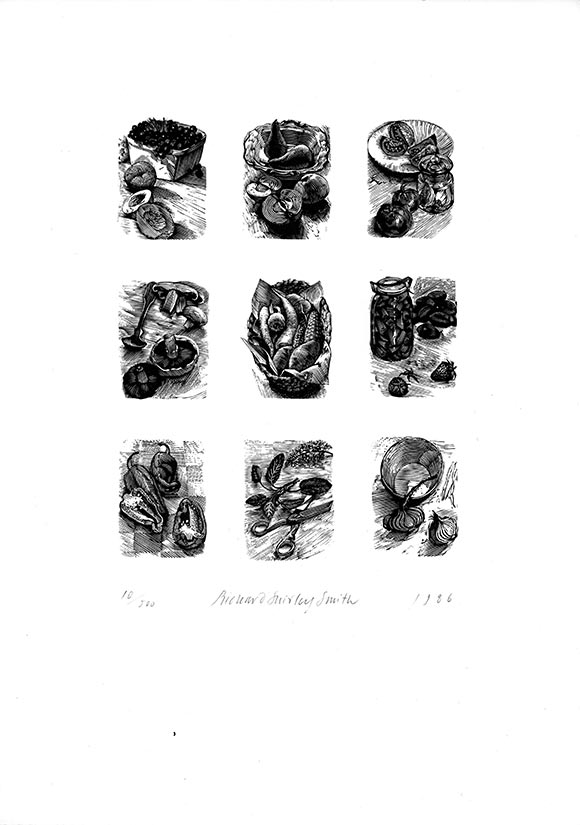 Nine Vignettes are engravings on boxwood originally commissioned as decorations for The Gourmet’s Garden (Faber & Faber, 1964). They are here printed directly from the blocks in a numbered and signed edition of 500 copies on 145gsm Zerkall mould-made paper. The printing has been undertaken by Jonathan Stephenson at the Rocket Press Blewbury, Oxfordshire.

Richard Shirley Smith is one of Britain's leading wood engravers. He was born in Hampstead in 1935. He was educated at Harrow School where he met David Jones, who greatly influenced his later work both as an engraver and a painter. After studying at the Slade School he studied for a further two years in Rome. His notable work as a book illustrator includes Poems of P.B. Shelley for the Limited Editions Club, the Earl of Chesterfield's Letters to his Son for The Folio Society and Messer Pietro Mio for the Libanus Press. In 1985 a major retrospective exhibition of Richard Shirley Smith's work as an engraver, painter and muralist was mounted by the Ashmolean Museum, Oxford and the R.I.B.A. Heinz Gallery, London.